A Helping Hand for Tonga 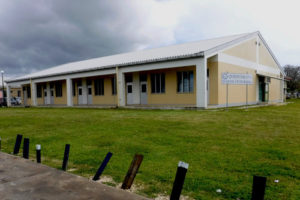 Freshly back from a scoping trip to Tonga, Take My Hand’s’ managing trustee, Janette, is more driven than ever to support the country in delivering better healthcare. What she found in Vaiola Hospital, one of Tonga’s two main hospitals, was a cause for hope. Now that the groundwork is in place and many of the needs are known, it’s time to muck in.

From the rose-tinted perspective of a tourist, Tonga may seem like the prime destination for relaxing, thrilling, and exotic experiences. A quick search on the Internet will immediately bring up images of Uoleva’s pristine white sand beaches, Tongatapu’s breathtaking lagoons, and exotic seafood dishes lined up on a pola: a long tray of plaited coconut fronds. Ask a local to describe the same country, however, and their words may paint a far different picture.

Health has been a long standing problem for the local populace. Five out of ten Tongans are reported to be obese, while four out of ten are assumed to have type 2 diabetes (BBC, 2016). These staggering statistics are thought to be caused by a complicated combination of culture, genetics, socio-economic conditions and the widespread availability of less healthy but more affordable foods.

On top of that, it’s been difficult for the island nation to find its place standing on its own two feet due to its reliance on international trade and remittances.

It’s a no-brainer that Tonga is struggling, and the team at Take My Hands have been keen to learn how best to play their part in supporting for awhile now. With their extensive experience supporting local healthcare in the Asia-Pacific region by working with local bodies to learn exactly what is needed and deliver those medical supplies, they’ve been waiting for the right opportunity to work together.

However, with over 104,000 Tongans spread out across 170 islands, and considering the fact there are only two main hospitals located in Nuku’alofa and the Vau Vau islands, it’s difficult to know where to start. So to get a lay of the land, Janette herself visited Tonga in August.

There, she spoke to both Dr George Aho, Head of Pediatrics, and Dr Hulita Ulufonua, Head of Obstetrics at Vaiola Hospital in Nuku’alofa. What she found was an urgent need for what we would consider basic medical equipment.

Dr Aho reported severe shortages in infant ventilation equipment as well as a lack of infusion and syringe pumps. Additionally, a dire need for a cardiotocography (CTG) machine to measure heart rates of babies was brought up by Dr Ulufonua, head of obstetrics. The latter struck a personal chord with Janette, with her recounting her own experience of going through two pre-term births.

“What a CTG machine does is measure a baby’s heart rate and a mother’s contractions during labour and can help identify issues quickly, and in some cases can be the difference between life and death. My first two boys were both born premature. For my first, it was the CTG machine that helped us determine that intervention was needed to get him out, and actually saved him from having some major life-long health issues”.

Thankfully, Take My Hands hashave a number of medical equipment collection programmes on the fly in New Zealand, and a network of partner organisations who are able to redistribute equipment., Together,so they’ll begin to get the cogs moving to see what they can do.

Take My Hands’ intuitive approach of hitting two birds with one stone – that is, New Zealand’s surplus of medical equipment that often is destined for landfill, and the Pacific regions’ dire need for support – has caught the attention and praises of NZI Sustainable Business Network Awards. They have been selected as finalists for the ‘Partnering for Good’ category in recognition of the excellent work they and their various partners in New Zealand and the Pacific have done.

But it’s looking to the future that excites Janette most. Her trip scoping Tonga, as well as the critical partnerships that Take My Hands continue to cultivate in the region, have allowed them to understand the different ways in which they can best support the country.

Together with their various partners in New Zealand and the Pacific, they’re well placed to help Tonga take some much-needed steps in the right direction.

Take My Hands operates on the smallest of budgets to deliver enormous impact in the regions where they work, as recognised by their selection as finalists in the NZI Sustainable Business Network Awards. If you would like to be a part of their work, we’d love you to learn more and support them with a regular donation through One Percent Collective.

No comments to show.